In my last blog entry, I told you about the Monday at Mahall's event I'm hosting August 4th at 7:30 p.m. with featured poets Sean Thomas Dougherty, John Dorsey and John Swain.  Now I'd like to tell you about three more readings in the coming month:

Posted by John B. Burroughs at 7:33 AM No comments:

August 4th 2014 at 7:30 p.m., join us for a fabulous night of live poetry, featuring literary treasures Sean Thomas Dougherty, John Dorsey and John Swain - plus, for any who dare, brews, bowling and a bowl-you-over open mic. It  happens at Mahall's 20 Lanes, 13200 Madison Avenue in Lakewood, Ohio.

John Swain of Louisville, Kentucky, is the author of several acclaimed books including Ring the Sycamore Sky (2014, Red Paint Hill), Rain and Gravestones (2013, Crisis Chronicles), White Vases (2012, Crisis Chronicles). Oct Tongue -1 (a collaborative book by John Swain, Mary Weems, John Burroughs, Steve Brightman, Shelley Chernin and Smith and Lady) is forthcoming and may be available in time for this event.

Sean Thomas Dougherty was born in 1965 in New York City, and raised in Toledo, Ohio, and Manchester New Hampshire. As an adult he has lived significant years in Syracuse, New York, Cleveland Ohio and for more than a decade on and off in Erie, PA. He is the author or editor of thirteen books , They include All I Ask for Is Longing: Poems 1994- 2014 (2014 BOA Editions), Scything Grace (2013 Etruscan Press), Sasha Sings the Laundry on the Line (2010 BOA Editions) which was a finalist for Binghamton University’s Milton Kessler literary prize for the best book by a poet over 40, the novella The Blue City (2008 Marick Press/Wayne State University), and Broken Hallelujahs (2007 BOA Editions). His awards include two Pennsylvania Council for the Arts Fellowships in Poetry and a Fulbright Lectureship to the Balkans. Known for his dynamic performances. he currently works at a pool hall, teaches private students and travels widely for readings.

John Dorsey was born in a military hospital in Hawaii in 1976. Raised in Western Pennsylvania, he has traveled extensively reading his poetry and speaking all over the world for the past 20 years in esteemed venues such as Assumption College in Worcester, MA, Cleveland State University in Cleveland, OH, The University of the Arts in Philadelphia, PA, The University of Toledo in Toledo, OH, and The Beyond Baroque Literary Arts Center in Venice, CA. Full length collections include Holy Toledo: The Sonnet River Volume (Sleepy Brooklyn, 2008), Sodomy is a City in New Jersey (American Mettle Books/Grievous Jones Press, 2010), Tombstone Factory (Epic Rites Press, 2013) and Natural Selection: Early Poems (Kilmog Press, 2014). He is also the Co-Editor of Numbskull Sutra, the Selected, Collected, and Rejected Poems of S.A. Griffin (Rank Stranger Press, 2007). His work has been nominated for the Pushcart Prize and has appeared in magazines and anthologies in at least 20 different counties. He may be reached at archerevans@yahoo.com
Posted by John B. Burroughs at 4:59 PM No comments:

Many thanks to Linda Ashok of RædLeafPoetry-India for her review of j/j hastain's Secret Letters chapbook [which was published by Crisis Chronicles Press]:

This week was the 22nd anniversary of my arrest.  A lot has changed since then.

Posted by John B. Burroughs at 6:55 AM No comments: 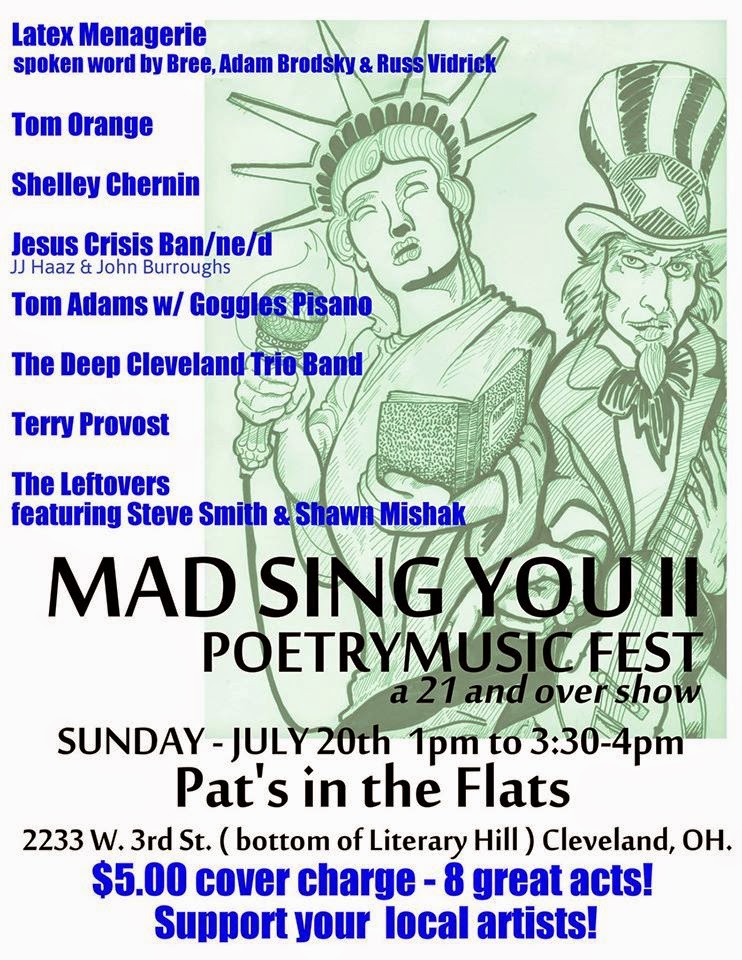 Our second annual Mad Sing You PoetryMusic Fest will feature:

Posted by John B. Burroughs at 7:08 AM No comments:

Thank you so much!

Join the madding crowd at https://www.facebook.com/crisischroniclespress.
Posted by John B. Burroughs at 4:37 PM No comments: