The Gasconade Review Presents: Missouri Is a Ghost-Shaped Thing

Thrilled that 3 newer poems of mine appear in fine company in this new issue of the Gasconade Review edited by John Dorsey and Jason Ryberg pic.twitter.com/kCnZL6I6B6
— John Burroughs (@jesuscrisis) July 30, 2018

Dianne Borsenik and I will have the pleasure of performing at the Athens Community Arts & Music Festival the afternoon of August 18th. And that's just one of the many great events I'm looking for forward to participating in during the next few months. Just my featured readings and book fairs include:


...and more to be announced when either the events or my arrangements are nailed down.
Posted by John B. Burroughs at 10:20 AM No comments:

I Misc You Again

Here are a few of the things I wanted to blog about in recent months but never did.

On April 2nd, Marcia Epstein interviewed me for her Talk with ME podcast.

In May, I was interviewed on video for Sundress Publications' CookBook project.

My poem "Unfounded" was a finalist (3rd place) in Goodreads' June 2018 poetry contest.

There are new reviews of my 2018 chapbook Loss and Foundering [Nightballet Press] here and here.

And Diane Kendig recently wrote a clerihew about me.

More soon, including a video clip from my performance at the National Beat Poetry Festival on June 2nd in New Hartford, Connecticut.  Stay tuned....

There are so many sad and bad things in the world today, but I have a bit of good news. For the first time since 1987, today I am student loan free! 31 years ago when I was a student at Lorain County Community College, I borrowed $2058. It took me paying a total of $9425 over more than three decades to finally rid myself of this albatross. I'm grateful that Pell Grants, a Dean's scholarship and a supportive mom prevented me from having to borrow more. But my obligation was a mere drop in the ocean compared to what many of my friends have had to borrow to pay for their educations. Student loan reform is essential. And free college or trade school for young Americans is as doable as free high school if we only want to make it a priority.
Posted by John B. Burroughs at 2:02 PM 2 comments: 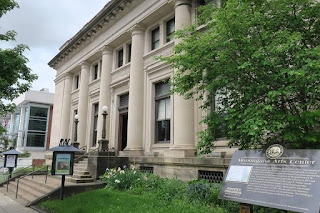 Many thanks to Writing Knights for hosting us on July 13th at The Local. The evening began with a reading by Akron poet Paul Mangus. My reading (begins around the 17:30 mark on the video) was next, followed by Writing Knights' first ever "sWord Fight" (between JM Romig and Jamie Laubacher). Skylark Bruce served as emcee and Azriel Johnson ran tech. The poems I read were:

All of these poems I read came from my recent NightBallet Press book, Loss and Foundering, except three: "Odd Missive" (new and unpublished), "Inner Expedition" (from Beat Attitude, NightBallet, 2015) and "Tell Them I Am Sent You" (from Electric Company, 2011, Writing Knights).
Posted by John B. Burroughs at 9:50 AM No comments:

Thanks to everyone who came out to Visible Voice Books last night. Fine words and people! Smith was all that and more. If you missed it

:) - you can catch me at The Local in Canton this Friday the 13th, where Paul Mangus and I will be the featured performers, plus Writing Knights will host their first-ever "sWord fight" (between Josh Romig and Jamie Laubacher). They'll have an open mic as well. Take the Knight Off: Inspiration Showcase. 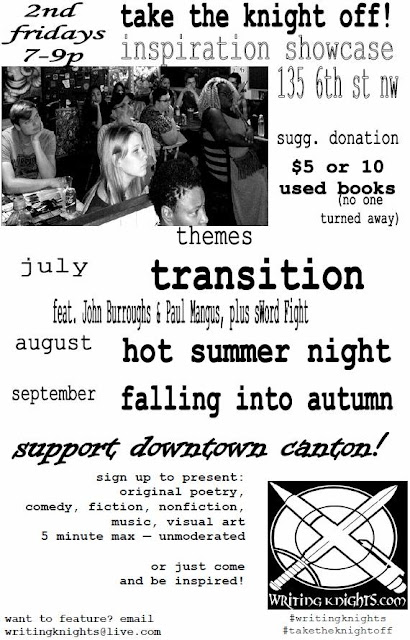 Posted by John B. Burroughs at 4:21 PM No comments: