I'm starting to put together my 2020 Poetry calendar and I'd love to read for/with you if we can make it happen. Still touring behind my latest book, Rattle & Numb: Selected & New Poems, 1992-2019 [Venetian Spider Press], I’ll read at your bar, festival, living room, bookstore, gallery, university or spacecraft - especially if you’re in Ohio (since I’ll still be the Beat Poet Laureate for our fair state through 2021), though I’m always open to travel for the right gig. For booking, please email jc@crisischronicles.com.

Stay tuned. More to be added.

Poetry+ to feature Chuck Salmons and Renay Sanders, 1/21 in Lakewood 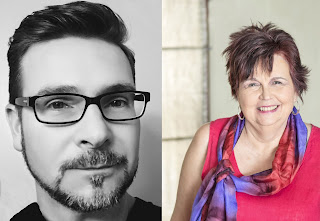 Poetry Plus at Art on Madison will triple your pleasure in January with readings by two acclaimed featured poets - Chuck Salmons and Renay Sanders - plus an open mic. Doors open at 7 p.m.

A native of Columbus, Ohio, Chuck Salmons is a poet and currently President of the Ohio Poetry Association. He earned a B.A. from Otterbein College and a M.A. from Northern Michigan University.

Chuck's poems have appeared in several journals and anthologies, including Pudding Magazine, Evening Street Review, Olentangy Review, Common Threads, The Fib Review, Red Thread Gold Thread, Everything Stops and Listens, and Appleseeds. His chapbook, Stargazer Suite, was released in December 2016 and is available from 11th Hour Press. His second chapbook, Patch Job, was published by NightBallet Press in 2017.

He won the 2011 William Redding Memorial Poetry Contest, sponsored by The Poetry Forum of Columbus, and has garnered awards from Ohio Poetry Day. Most recently, he is a recipient of a 2018 Ohio Arts Council Individual Excellence Award for his poetry. Chuck regularly gives readings throughout Ohio, both solo and as part of the poetry trio Concrete Wink. He also leads workshops for various groups and audiences.

Chuck has worked in a variety of fields, including construction, education, and retail. He loves science, which often influences his poems, and is thrilled about the discovery of water on Mars and gravitational waves. He works as a science editor in Columbus.

S. Renay Sanders learned to love the spoken word amidst a family of storytellers. She began secretly writing her own stories as poems. She came out of the poetry closet in 2010 with a poem in the Hessler Street Fair Poetry Anthology. She subsequently had poems published in a variety of anthologies. Her most recent accomplishment is the publication of her first chapbook, Dancing in Place. Coming full circle, she has ventured into storytelling and proudly performed her story "Cemetery Run" in the Women of Appalachia Project, Spoken Word, 2019. Today she proudly lives the poetic lifestyle. Continuing to enjoy the local poetry scene as an open mic-er and occasional feature. A native Clevelander, her poems are inspired by the characters she encounters in life and the beauty of the Cuyahoga Valley, where she now resides.

Please note: Poetry+ usually happens on the third Tuesday of each month. For more information, visit our website at https://poetrypluscleveland.weebly.com. 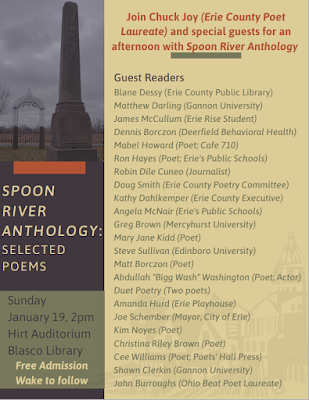 This Sunday, 19 January 2020, I will be part of a diverse cast in a staged reading of Edgar Lee Masters' Spoon River Anthology, Selected Poems, presented by Erie County Poet Laureate Chuck Joy and the Erie County Public Library. You can call me Theodore the Poet.

My poem "Food for Thought" featured 1/15 in Winedrunk Sidewalk

I am pleased to report that my short poem "Food for Thought" is featured today (day 1092) in Winedrunk Sidewalk. It's another that I wrote at the Hill Billy Grill in West Jefferson, North Carolina, during my recent Tiny Cabin, Big Ideas residency. Many thanks to editor John Grochalski for including it—and for keeping up the good fight!

And they're still accepting submissions of poems and art as we speak. So send them something!

SUBMIT2RESIST: winedrunksidewalk@gmail.com.
Posted by John B. Burroughs at 3:39 PM 2 comments:

Burroughs and Chernin to Read in Wadsworth this Saturday 1/18 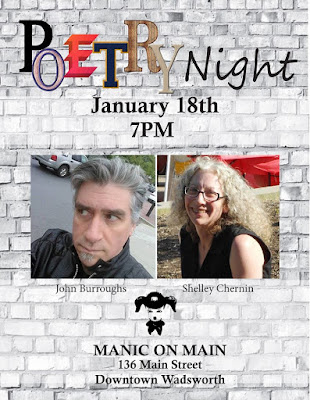 I will have the honor of reading with Shelley Chernin again this Saturday at Manic on Main in Wadsworth, Ohio. Many thanks to Cat Russell and Kristin LeFever Beck for putting this special event together!  I have fond memories of Wadsworth from visiting family there on lots of weekends as I was growing up.

This will be part of my ongoing Rattle and Numb poetry tour. We'll also be celebrating the fact that my Crisis Chronicles Press has just reprinted Shelley's chapbook, The Vigil.

Poet of the Week on the Super Highway

Honored that Jefferson Carter and I have been selected as Poets of the Week (January 13-19) by the Poetry Super Highway​! The poem they selected of mine ("Faith Without Works Is Dead") is a short one written at the Hill Billy Grill in West Jefferson, North Carolina during my recent Tiny Cabin, Big Ideas​ residency. 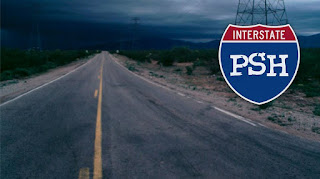