After my last blog posting, things moved rather quickly.  Within hours of Geri being reactivated on the liver transplant list, she received a liver offer.  After a long night and next day of waiting, she was finally ushered to the operating room at 3 a.m. on December 22nd.  The seven hour surgery was a success.  We had hoped she'd be out of ICU within a day, but the docs needed to fine tune some things first.

Meanwhile, on the evening of the 26th, Geri's vehicle lost its front driver-side corner.  I dropped it off at Progressive early this morning. It will take about a week to fix and cost us a $1000 deductible.

Finally, to make a long story short, here's what I posted on Facebook a couple of hours ago (evening of the 28th):

Been a couple more long days at the hospital. Was here till midnight last night - had gone home at 8 but had to come back because Geri wouldn't take her medications for anyone but me. But slow and steady progress continues. Tonight she finally made it out of ICU to the transplant special care floor, one step closer to returning home.
Posted by John B. Burroughs at 11:45 PM 2 comments:

The infectious disease doctor and anesthesiologist have cleared Geri for transplant. Her breathing is much better than yesterday. The kidney doctor is gonna switch her from continual to intermittent dialysis. And they're starting some mild physical therapy. All good news. But the biggest news is that the liver fellow was just in and said they're gonna try to have her relisted by this evening and because her meld score is so high, there is a chance she could get a liver by Christmas, or soon after.

A few very kind friends of ours have expressed a willingness to serve as a living donor, for which we are grateful beyond the best words I can muster. But we haven't been able to follow up because both the Clinic and her insurance wanted Geri to be active on the transplant list before starting the screening process. However, now it's looking like she will get a liver from a deceased donor faster.

As I was writing this, a transplant surgeon came in and gave her the final good-to-go. So she'll definitely be relisted today.

We are amazed by your extraordinary kindness and generosity. Lots going on here, so I'll try to catch up with personal messages later. <3
Posted by John B. Burroughs at 5:30 PM 2 comments:

Her breathing tube came out yesterday. Lots of progress since. Lots of different doctors coming in and out today to assess and clear her. They just did a CT scan of her chest. And if everything checks out she could be reactivated on the transplant list as soon as tomorrow. We're most grateful for your kindness, concern and good wishes.

Update: CT shows she has a pleural effusion around her right lung, so they're doing a thoracentesis to drain that. But we're still on track. Only awaiting clearance from one more doctor, the transplant anaesthesiologist.

Got a call from Geri's nurse at 5:45 a.m. She said that after a night of dialysis she's almost totally awake for the first time in around a week. Of course she can't talk because she still has the breathing tube in. But she was trying to tell them something, so they gave her a dry erase board and asked her what she wanted. She wrote, "John."

The doctors have identified a likely culprit: uremia. Because of impaired kidney function, she has high urea levels in her blood. This can deactivate platelets, causing unusual bleeding, and can also make her extremely drowsy and out of it. The doctors are optimistic that by doing some short-term dialysis, they can reduce the urea and solve both her bleeding and her consciousness issues, allowing them to take her off the ventilator and get her reactivated on the liver transplant list soon.
Posted by John B. Burroughs at 3:01 PM 4 comments:

Lots of ups and down this past week. Last Thursday we thought they were releasing Geri to a rehab facility, Friday she went back to ICU with breathing difficulties. Sunday and Monday she was largely unconscious. Tuesday she seemed to be coming out of it but then she started choking on blood and had to be put on a breathing machine to protect her airway. Today they were planning to extubate her because she can't be reactivated on the liver transplant list until she's off the machine. But that didn't happen because they need to work on her clotting issues, deal with some declining kidney function issues and get her more conscious first. That's making a long, extremely complicated story as short as possible. Everytime I go to post an update, something changes. Thanks for all your best wishes and support.

Posted by John B. Burroughs at 8:16 PM No comments:

Back to ICU (again)

Yesterday, we thought Geri might be going to a rehab facility by Monday. But today they're working on sending her back to ICU instead. Her difficulty breathing increased overnight. Fluid has been reaccumulating in the pleural area around her lung, so she needs another thoracentesis to drain it. But paradoxically they also need to give her fluid to increase her very low calcium level. Everything is a delicate balance. They can monitor and fine tune it more closely in ICU.
Posted by John B. Burroughs at 10:02 AM No comments: 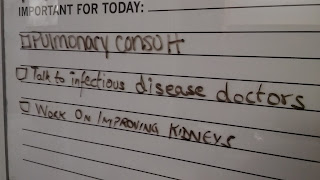 Well, yesterday when we were told she had no more infection in her lungs, what they were referring to was bacterial infection. Another doctor came in this morning and said it appears she has a yeast infection in her lungs. He said when they take the samples via bronchoscopy to see what grows in them, it takes longer to see a fungus (which is slower growing) than it does bacteria or viruses. So they didn't detect yeast until today.

And as this photo of today's board in her room shows, the docs are always working on multiple things at once.
Posted by John B. Burroughs at 3:19 PM No comments:

We found out this morning that here's no more infection in Geri's lungs. Then she got up and walked a few steps for the first time in about a week. So hopefully they'll let her out of ICU and reactivate her on the liver transplant list today. Interesting that my Kindle tried to autocorrect her name to "Hero."


One good thing has come of Geri's illness: it looks like the US Department of Education is gonna completely discharge her $6000+ in outstanding student loan debt. Of course we'd much rather have her healthy and owe the money.
Posted by John B. Burroughs at 3:31 PM No comments: