It's been a busy busy busy past five months for me.  For the first time ever, Crisis Chronicles Press published 10 titles before the midpoint of the year.  Good thing, too, as we still have 19 more titles we plan to publish in the next twelve months. I've also given 11 readings so far this year, with 7 more to come.  I made my first-ever trip west of the Mississippi River and first-ever visits to Illinois, Missouri, Kansas and Iowa. My father-in-law Arthur passed away in March. And I began a new day job in May, which soon gave way to an even newer and more time consuming job.

The next three titles Crisis Chronicles Press plans to publish are Ode to Horatio and Other Saviors by Carolyn Srygley-Moore, Inquiry into Loneliness by Meg Harris and an as-yet-untitled collection by Helen Shepard.  After those are out, the press will be caught up to October 2014 and less than two years behind for the first time in, well, years. Titles we are committed to publishing after that include work by Juliet Cook, Christopher Franke, Eric Anderson, Mark Sebastian Jordan, George Wallace, Lyn Lifshin, Margaret Bashaar, Dianne Borsenik, Kathleen Cerveny, John Greiner, Lisa Cihlar, Luba Gawur, Elliot Nicely, Michael Estabrook, Christopher Mulrooney, Dion Farquhar, Sarah Frances Moran, Steven B. Smith, John Dorsey, Victor Clevenger, Chansonette Buck and John Swain.

Finally (for now), I'm very much looking forward to my next three reading gigs, all in new (to me) venues and with a wide and fine assortment of poets.

See the rest of my 2016 poetry reading tour dates here.
Posted by John B. Burroughs at 10:15 AM No comments:

My Poetry Double Header May 21st in Mansfield and Lorain 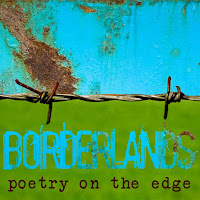 I look forward to playing a poetry double header this Saturday, 21 May, at two of my favorite venues.

First up, at 2 p.m. I will be sharing poetry along with the incomparable Michael Veloff at Main Street Books in Mansfield, Ohio, as part of their monthly Borderlands: Poetry on the Edge series hosted by Mark Sebastian Jordan.

Next up, at 6 p.m. I will be poeticizing alongside featured artists Bruce Weigl, Dianne Borsenik, Tom Adams, Liz Delgado, Robert Moore and Ryan Sagert, hosted by Antonio Barrios at the Lorain Arts Council in Lorain, Ohio. 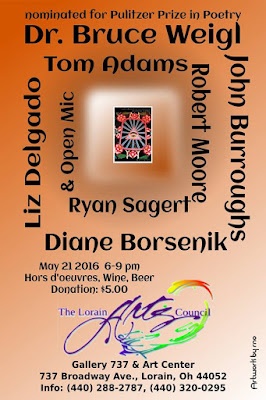 Both events will include an open mic, wine and more.

Hope to see you at one or both!

And to see my full 2016 Poetry Reading Tour schedule (also including upcoming gigs in Cleveland, Toledo, Painesville, Pittsburgh, Buffalo and Frostburg) please click here.
Posted by John B. Burroughs at 3:21 PM No comments:

What a great day of poetry and friends new and old from far and near at the Barking Spider Tavern Saturday! Many thanks to everyone who contributed and participated. I am pleased to announce that the winners of this year's Hessler Street Fair Poetry Contest are:

These three fine poets will read their winning entries at the historic 2016 Hessler Street Fair Sunday 22 May between 1 and 2 p.m., simulcast on WRUW-FM 91.1 Cleveland.

Copies of this new anthology are available from Mac's Backs-Books On Coventry and at the Fair itself.  Read more about it here. 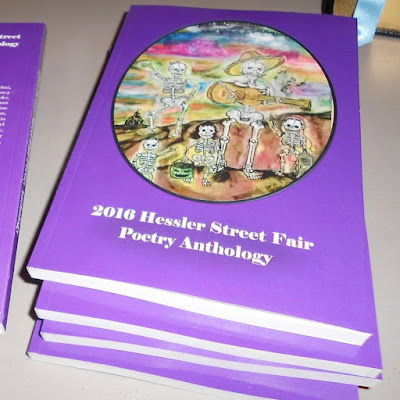 Crisis Chronicles Press is pleased to present the 2016 Hessler Street Fair Poetry Anthology, featuring 108 poems by 106 writers from Greater Cleveland and around the world. Join us for the official release 7 May 2015, 3 p.m., at the Barking Spider Tavern, 11310 Juniper Road in Cleveland, Ohio. This book is perfect bound, 154 pages, edited by John Burroughs and available for $14, either at the launch event, from Mac's Backs or on May 21-22th at the Hessler Street Fair itself. Cover art by Frankie Metro.

Contributors may show up at either event or contact Suzanne at Mac's to procure a copy for half price.
Posted by John B. Burroughs at 11:08 PM No comments: 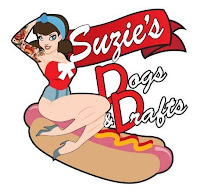 I'm looking forward to reading with Dianne Borsenik (whose Age of Aquarius: Collected Poems 1981-2016 Crisis Chronicles Press just published) and Matthew Minicucci (whose Translation was chosen by Jane Hirshfield for the 2014 Wick Poetry Prize and published by Kent State University Press) on Wednesday May 4th 2016 at Suzie's Dogs & Drafts, 34 N. Phelps Street in Youngstown, Ohio. This event is part of an ongoing series hosted by Lit Youngstown at Suzie's the first Wednesday of every month.

RSVP on Facebook.
Posted by John B. Burroughs at 7:21 AM No comments: