The central US part of my upcoming poetry tour (March 30th through May 10th) is now set in stone. Immediately after this I will head northeast for the New England part of my tour (Climbing up the Neck of America, which I'm still working on solidifying, so I will post about it later). Hope to see you at one or more of these special events!

15 April in Miami, Oklahoma
John Burroughs and Dianne Borsenik will give an impromptu reading on the banks of the Neosho River via Facebook Live. Time to be announced an hour in advance.

20-21 April in Cleveland, Mansfield and Cleveland Heights, Ohio
Kleft Jaw Press and Crisis Chronicles Press present Kleft Crisis 2018 featuring 20+ writers from across the USA at three of northeast Ohio’s bookstores:
*Friday 4/20 from 7 p.m. to ? at Guide To Kulchur Books (Cleveland)
*Saturday 4/21 from 2 to 4 p.m. at Main Street Books (Mansfield)
*Saturday 4/21 from 7 to 10 p.m. at Mac's Backs-Books On Coventry (Cleveland Heights)

8 May in Cleveland, Ohio
Incite: A Poetic Conversation. Ra Washington dives into the deep end with Dianne Borsenik and John Burroughs at Guide to Kulchur Books, 5222 Lorain Avenue, 44102.

My Amazon Marketplace Selling Privileges Have Been Restored

You may recall that at the end of last year Amazon suspended my seller account pending review.

Today they finally reactivated it after I CC-ed the big man, jeff@amazon.com, in my latest complaint this morning:

Why has it taken two months (and counting) to review my seller account? I sent you all the information you required with a detailed explanation and I've gotten nothing but rote and or automated responses back saying my account is still under review.  Meanwhile, customers who seek the unique books I sell in the Amazon Marketplace are complaining that they wrote to Amazon well over a month ago and were assured these books would be available again in a week and they are still waiting because you haven't completed the review of my account, which to this point has had a stellar rating from customers.

Within two hours I received this response:

We reviewed your account and the information you provided, and we have decided that you may sell on Amazon.com again.

In our efforts to protect our community, we sometimes err on the side of caution. We are sorry for any inconvenience this has caused."

So you can start buying used and new books from me there again! However, if it's Crisis Chronicles Press books you're looking for, it's still better (and less expensive for you and us) if you buy them directly from the publisher.

Thank you for your continued support!
Posted by John B. Burroughs at 12:36 PM No comments:

Without meeting Melissa Guthrie when I was 14 or so, I might never have been a poet. Her obituary doesn't do her justice. But then neither can I.  Fare well, dear friend.

Posted by John B. Burroughs at 9:21 AM No comments:

My first haircut since 2015

Thanks to my longtime friend Steven Provoznik of Bay West Salon for doing the deed. 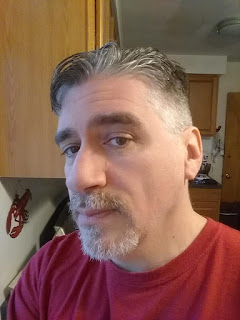 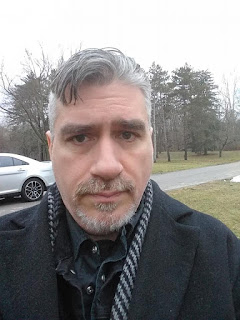 Posted by John B. Burroughs at 6:12 PM No comments: 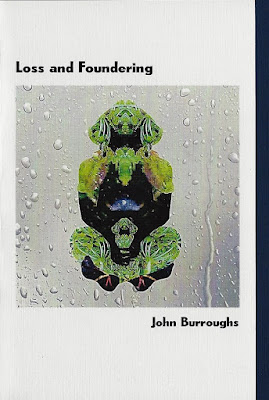 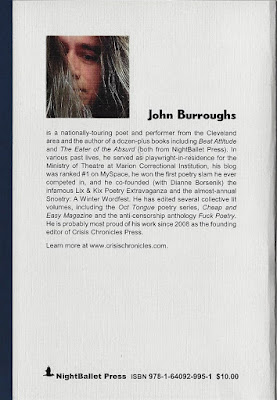 Embarking on a New England poetry tour in May

It appears I'm going to be reading in Portsmouth, New Hampshire, on May 17th. I'd like to turn this into a mini New England poetry tour. If anyone can hook me up with a reading somewhere else up there (RI, ME, MA, NY, VT, CT - or on my way home to Cleveland) between May 15th and May 31st, I'll be extremely grateful.
Posted by John B. Burroughs at 8:10 AM 2 comments: 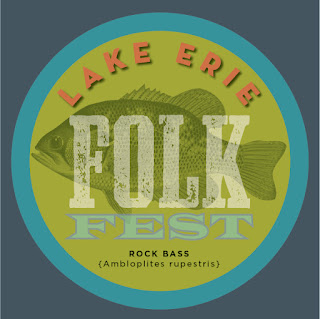 Join Dianne Borsenik and me February 24th for a poetry workshop and open mic at The Lake Erie Folk Fest! We'll be on from 4 to 4:45 pm in room 258 of the Shore Cultural Centre, 291 E. 222nd Street, Euclid, Ohio 44123. See a full schedule of the day's workshops here. See all the day's musical acts here.

For more info on our part of the festivities, see
Step Up! Poetry Open Mic & Workshop. 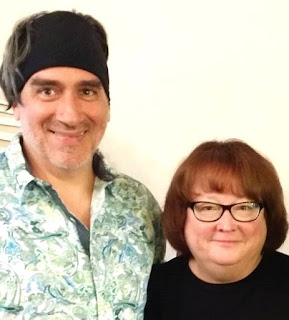 John Burroughs and Dianne Borsenik have been performing their poetry and hosting events for the past ten years. Together, they produced the Lix & Kix Poetry Extravaganza reading series, Snoetry: A Winter Wordfest series, the Punch Through the Envelope workshop, and many other poetry events. They also travel, reading their work and connecting with poets across the United States. Burroughs lives in Parma, Ohio, where he publishes Crisis Chronicles Press. Borsenik lives in Elyria, home of NightBallet Press.
Posted by John B. Burroughs at 11:49 AM 2 comments:

One year ago today