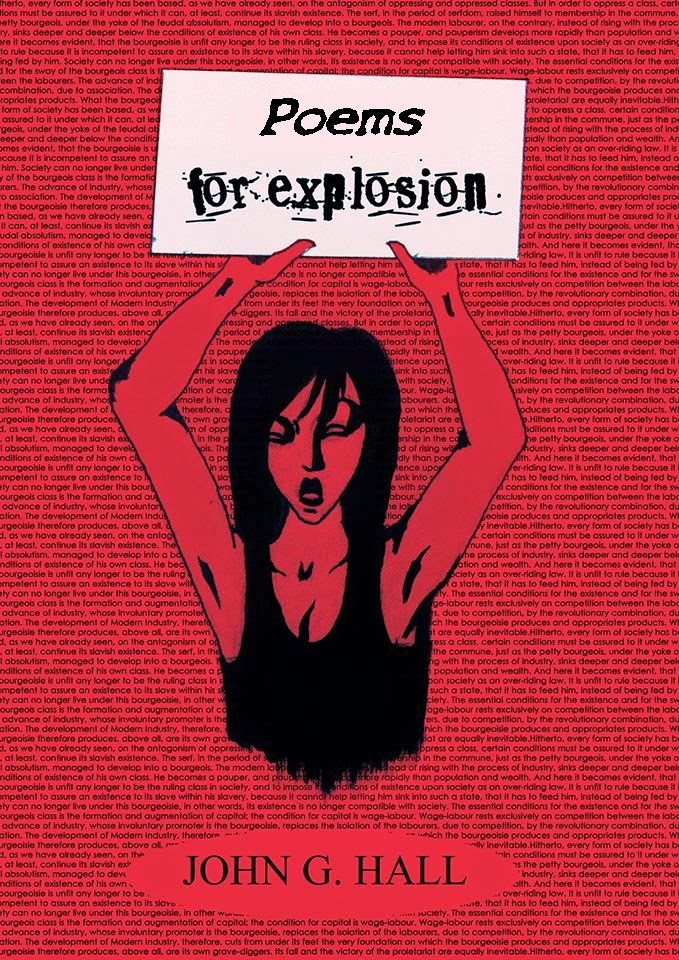 We are thrilled to announce the long-awaited publication of John G. Hall's Poems for Explosion in February 2015.  This book features 60 pages of Hall's best poems, illlustrated by Becky Mackay, and is available for a mere $10 US from Crisis Chronicles Press, 3344 W. 105th Street #4, Cleveland, Ohio 44111 USA.


Jack Hirschman says of Poems for Explosion, "These are 'letter rip' poems by a very conscious British poet who is forever breaking the chokehold that Willie Shakespeare has bent around the neck of that island. Hall really wants to include everything and everybody - he unloads personal and political contradictions with an organized spontaneity that is refreshing and millennial, and his urgencies are upbeat and rooted in a totalizing expressivity."

Gerry Potter says, "Powerhouse tenderness and lyrical agility bind together John's remarkable use of language to give work of lasting worth and historical accuracy. John G. Hall is poet first and foremost and a 20th-21st century documenter second to none. In a world of increasing unfairness we need work of this richness and colour to keep us sane." 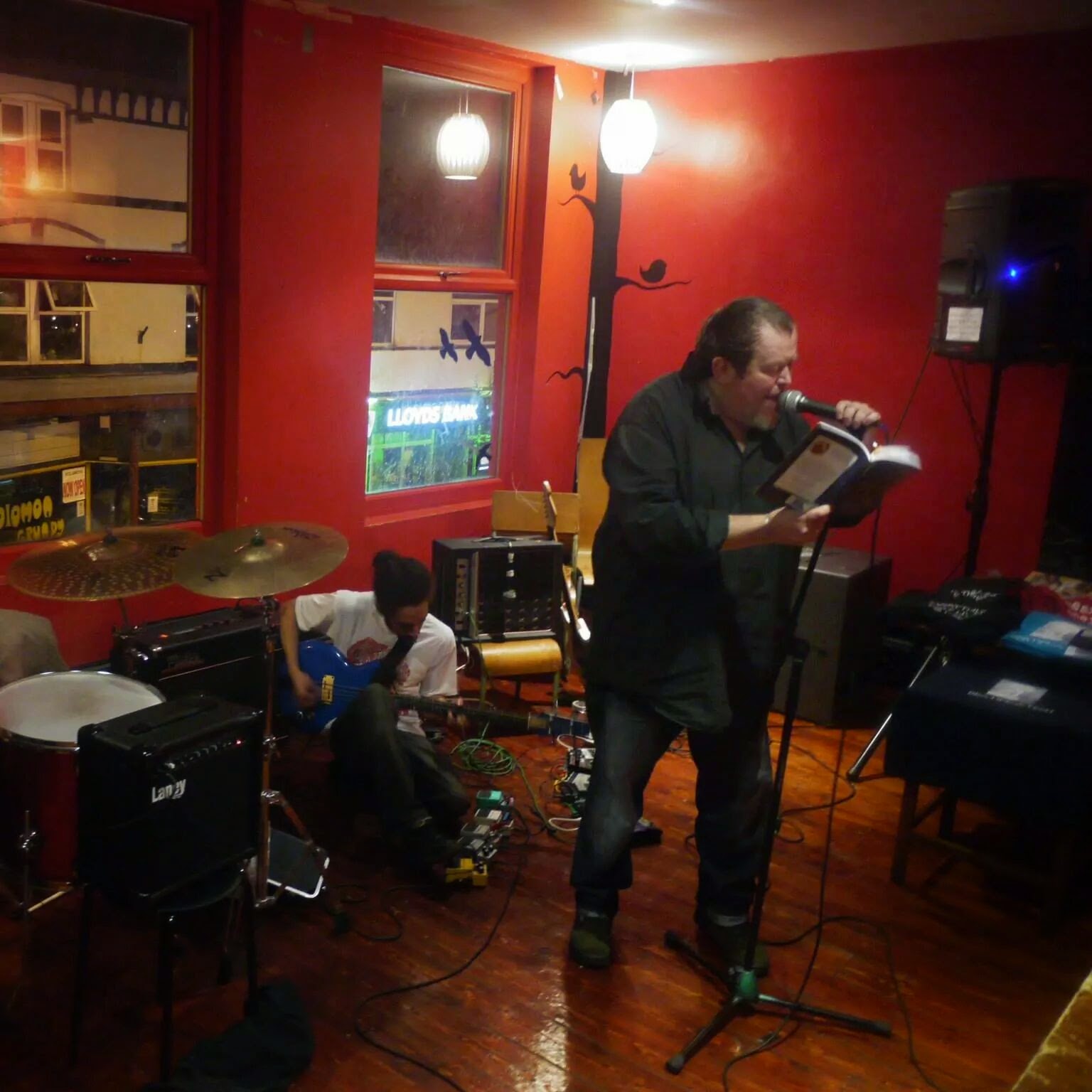 John G. Hall is a Manchester (UK) poet who has served as the editor of Citizen32 and the host of Beatification. His previous books include The Drowning Fish, Bang! and Spleen.
Posted by John B. Burroughs at 7:56 PM No comments: 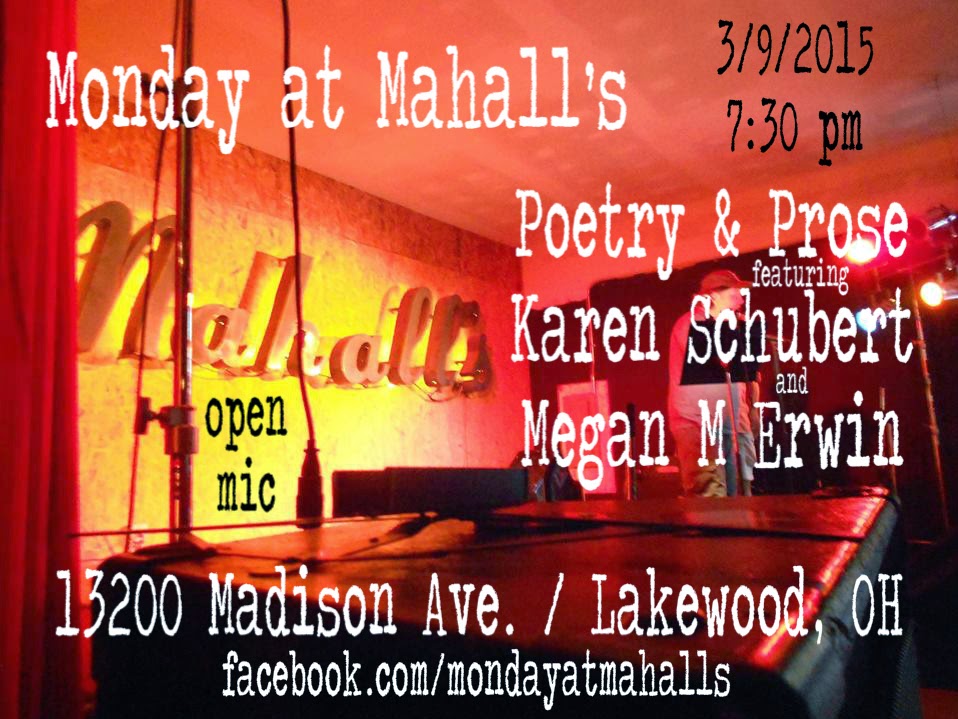 Karen Schubert’s most recent chapbooks are Black Sand Beach (Kattywompus Press, 2015) and I Left My Wings on a Chair (Kent State Press, 2014), selected by Kathleen Flenniken for the Wick Poetry Center prize. Her work appears or is forthcoming in PoetsArtists, The Louisville Review, American Literary Review, Best American Poetry Blog, and diode poetry journal. Awards include a 2013 residency at Headlands Center for the Arts and 2014 Pushcart Prize nomination. She is a founding member of Lit Youngstown, a new literary arts organization in Youngstown, Ohio.

Megan M. Erwin is a graduate of the North East Ohio Master of Fine Arts program and the former editor of Whiskey Island. A former Bisbee fellow, she is a recipient the Leonard Trawick Creative Writing Award, an Academy of American Poet’s Prize, and a scholarship to the Juniper Summer Writing Institute at the University of Massachusetts. Her work can be found at Everyday Genius and the Valparaiso Fiction Review.

An open mic emceed by John Burroughs will follow. Beer, bowling and balderdash optional, as always.

Posted by John B. Burroughs at 4:35 PM No comments: