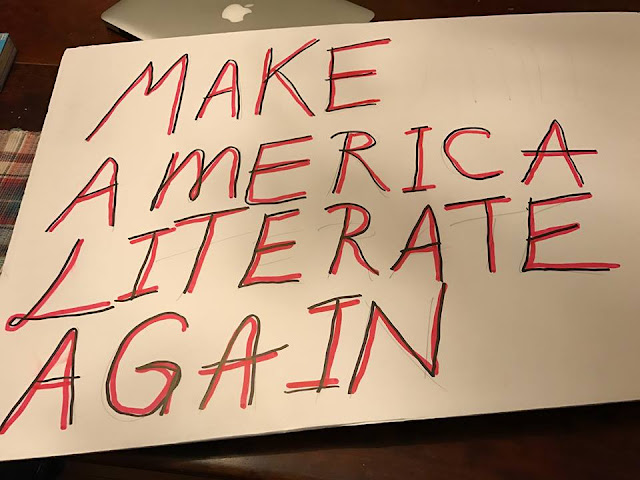 My friend Jane Rosenberg LaForge put one of my Facebook statuses onto a sign and carried it in DC during Saturday's Women's March. This is her photo.

Posted by John B. Burroughs at 9:09 PM No comments: 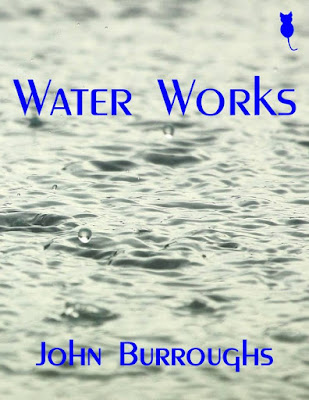 Celebrating five years after it was originally published by Recycled Karma Press, my chapbook Water Works is now being reissued by the The Poet's Haven as part of their Archive Series! Only $6. Get it here.
Posted by John B. Burroughs at 8:20 AM No comments:

We found out today that to get back on my wife's health insurance will only cost me a little over $950 a month. That's more than double what I paid for it in 2015. Good thing I have Obamacare to fall back on.

But interestingly, although it would cost us $950-ish to insure me, it only costs us around $350 to ensure my wife under the same plan, despite the fact that she's had far more health problems than I. So at least the one of us who needs it most is getting it.
Posted by John B. Burroughs at 10:39 PM 1 comment:

Geri is in Interventional Radiology to have the current, weeks-old dialysis catheter that's been coming out of her neck replaced with a new one that'll come out of her chest. Her new liver is working great. But prior to transplant she developed what appears to be hepato-renal syndrome, so it's taking some time for her kidneys to get back up to speed. Meanwhile, the other main thing we need to work on is getting her up and walking after being essentially bedridden for about three months. Physical and occupational therapy (and her doctors) have recommended that she go to the Cleveland Clinic's own acute rehab center in the next day or so, but first we need insurance approval. Yesterday, Medical Mutual denied it was necessary. But this is the same insurance company that tried at first to claim she didn't need hospitalized the last two times (though she would've died if she hadn't gone).  Their motto seems to be "Reject first, then finally actually consider the claim after it's appealed." So the appeal conference is this morning and I'm optimistic we'll get it resolved.

UPDATE a couple hours later: She's approved for one week of acute rehab. They'll extend it if she makes good progress.  So we'll be heading to M80 later today.
Posted by John B. Burroughs at 10:52 AM 1 comment:

Best day in a while

Best day yet for Geri! She's been in the hospital since November, got her liver transplant on 22 December, and continues to improve. We learned today that she'll be heading to rehab by the end of this week and hopefully home soon after. Happy new year!

In 2016 I traveled west of the Mississippi for the first time in my life, we got a new house, a good friend beat cancer, Barack Obama was president, the Cleveland Cavaliers won a championship, and my wife got a new liver. Beat THAT, 2017.
Posted by John B. Burroughs at 9:06 PM No comments:

Happy new year! I read 106 books in 2016 - most of them small press poetry works. 23 were NightBallet Press titles, 10 were Crisis Chronicles Press titles I published early in the year, and the three next best represented presses were Green Panda Press, Hyacinth Girl Press and the Cleveland State University Poetry Center. See all 106 here.