Get Bowled Over by Sara Holbrook & John Burroughs at Mahall's, January 6th 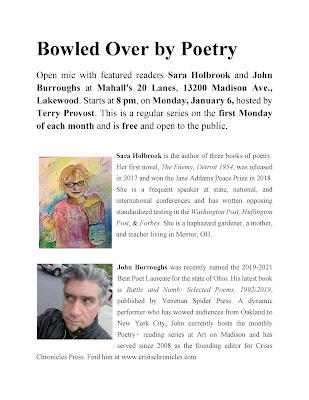 My first reading of the new year will be alongside the fabulous Sara Holbrook at Mahall's 20 Lanes in Lakewood, Ohio, and I couldn't be more excited. A homecoming of sorts! Monday January 6th at 8 p.m.

The last time I played the role of featured poet for Monday at Mahall's was July 13th 2013 when Catherine Criswell still ran the series. JJ Haaz accompanied me on guitar. A lot has changed since then. I took over running the series in April 2014, when Catherine took a job in California, and enjoyed playing the curator for about a year and a half until my wife Geri got so sick I decided to hand off hosting duties to the wonderful Terry Provost in October 2015. Now Terry's still going strong as host and I'm thrilled to be returning as one of his first featured poets of 2020 in support of my latest book, Rattle and Numb: Selected and New Poems, 1992-2019 [Venetian Spider Press]. Did I mention it's with Sara Holbrook?!?

Bowled Over by Holbrook/Burroughs
Monday January 6th 2020 at 8 pm
Open mic will follow the features.

Monday at Mahall's on Facebook: www.facebook.com/mondayatmahalls/.
Posted by J.B. at 6:19 PM