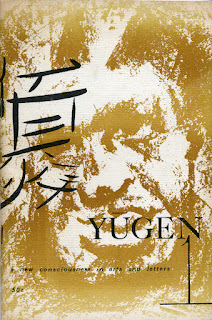 Ever since I read How I Became Hettie Jones a while back, I've been wanting to read Yugen, the literary magazine she and Amiri Baraka (then known as LeRoi Jones) edited between 1958 and 1962. So I am thrilled to have discovered this online resource, where one can download scanned copies of all 8 issues of Yugen:
https://realitystudio.org/bibliographic-bunker/yugen/
In its pages you'll find work by Philip Whalen, LeRoi Jones, Diane Di Prima, Jack Micheline, Allen Ginsberg, Gregory Corso, Tuli Kupferberg, LeRoi Jones, Gary Snyder, William S. Burroughs, Peter Orlovsky, Charles Olson, Frank O’Hara, Michael McClure, Jack Kerouac, John Wieners, Robert Creeley, William Carlos Williams, Barbara Guest, David Meltzer, Jerome Rothenberg, César Vallejo, Philip Lamantia, Tristan Tzara, Kenneth Koch, and so many more.
Posted by John B. Burroughs at 9:27 AM