This Monday will be my second-to-last time hosting the Monday at Mahall's poetry series, as Terry Provost will take over in October.  On July 6th at 7:30 p.m. we will feature three wonderful and wildly different poets:

Genevieve Jencson has an MFA in Poetry from Cleveland State University and the Northeast Ohio Master of Fine Arts Program (NEOMFA). Her work has appeared in H_NGM_N, Dressing Room Poetry Journal, and Alimentum: The Literature of Food. Her first chapbook, Lanugo, was recently published by Dancing Girl Press. She lives in Cleveland, Ohio. 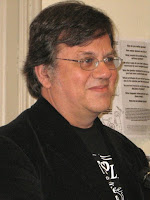 Chuck Joy loves Mahall's. Look at Facebook, his photo, Mahall's. Chuck visits from Erie, Poets' Hall his home club. Erie, Poetry City. Chuck is bringing his new book, Said the Growling Dog. Chuck and Growling Dog went to New York City for a pair of featured readings. Left Bank Books and the Saturn Series. Chuck was guest poet at the annual meeting of the American Academy of Psychoanalysis and Dynamic Psychiatry. Chuck appeared at the Erie Art Museum with the poetry and music concert show Exploring The Border (Music and Words). 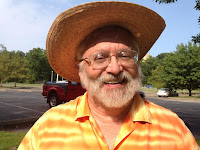 Greg Michaels is a native of Lorain, Ohio. He lived in California for 30 years where he performed stand-up comedy and wrote sketch comedy, humorous articles, song parodies and shtick for his comedy barbershop quartet. He became enamored with the humorous story-telling style of the cowboy poets, but he couldn't write about ranch life, of which he knew nothing. A movie title, Urban Cowboy, inspired him. He said “Someday I'll write Urban Cowboy Poetry, whatever that is.” Back in Ohio, he figured it out. He takes popular urban legends and retells them cowboy-poet style. He started performing them around town, and he is now part of the Cleveland poetry scene.

I, of course, will emcee an open mic following the featured poets.
Posted by John B. Burroughs at 11:14 AM