Me as the Best Cleveland Poem Competition's Sacrificial Poet

Here's me as the "sacrificial poet" at Sunday's 2nd annual Best Cleveland Poem Competition, sponsored by Tim Misny, hosted by Ray McNiece and won by Dianne Borsenik. Thanks to Celina C. Photography for the photo. 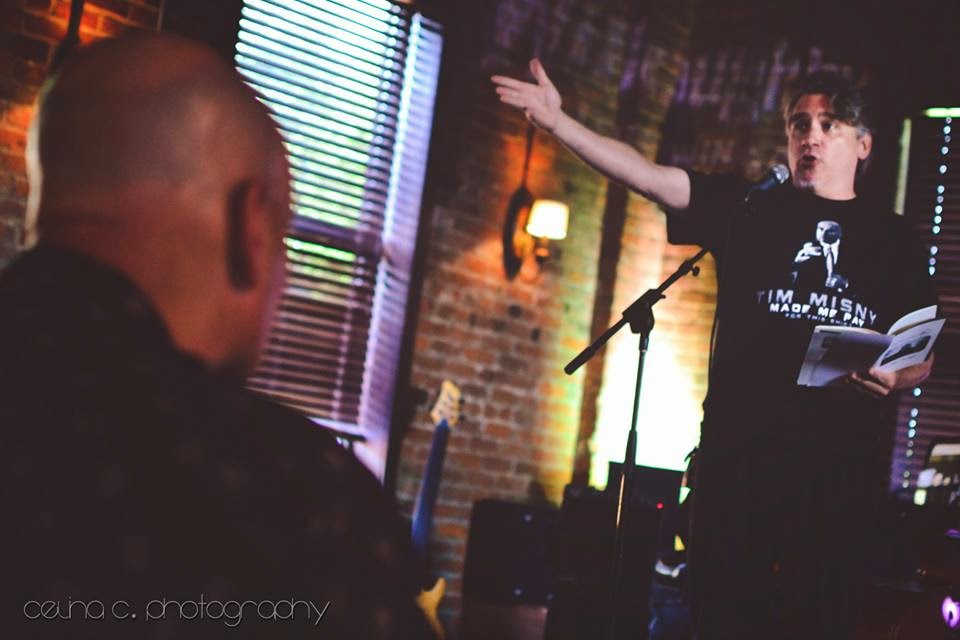 I didn't expect to read because I didn't submit to the contest (mostly because Crisis Chronicles Press plans to publish an anthology of the finalists' poems), so when Ray asked me to serve as the judges' warm up I wasn't prepared with a suitable poem.  But I did have a copy of my The Eater of the Absurd [2012, NightBallet Press].  The one real Cleveland poem in it - "Lit (Er, a Tour)" - was too long and and a bit depressing for the occasion, so I ended up performing "Roué Let" - which is not exactly a Cleveland poem, though it's about a casino and/or a fictional hook-up and there's no reason it couldn't have happened at our downtown Horseshoe, except that it didn't.  One of the judges, a woman whose name I can't remember, gave me a 4.2 (out of 10), the lowest score anyone got that day.  The other judges were more generous, with Tim Misny giving my not-really-about-Cleveland poem an 8.5, maybe because I wore his shirt.  [Wink.]  For comparison's sake, the contest winner, Dianne Borsenik,  received all 10s from the judges.  She earned it.  You gotta be more than great to make Tim Misny pay.  As for my own performance, I think it was good. But my poem did not exactly fit the theme (#ThisIsCLE), and I wasn't competing anyway.  I had a lot of fun though.

Some top poems from this year's competition will soon appear online at misnylaw.com.
Posted by John B. Burroughs at 7:11 AM