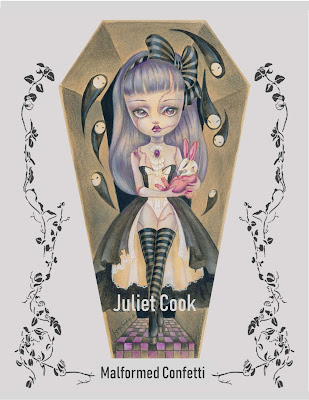 
All hail the Queen of Grotesque, Juliet Cook! Her imagery is monstrous, distorted and unnatural — an unmistakably unstable mixture of estranged dollcanos and blood. These poems plunge into “your neckline, your mouth, your eyes”— into the absurdities of existence, and Cook can barely contain all that is coming apart, even “a stuck tongue keeps breaking.” Malformed Confetti is alive! And absolutely “plotting an insurrection.”
—Susan Yount, editor of Arsenic Lobster Poetry Journal

Juliet Cook’s full-length collection, Malformed Confetti, is a visceral examination of the body: bones, blood, teeth, breasts, ovaries, eyes, throat and thighs. Cook’s poetry is elemental grindhouse feminism; confronting what is most difficult with the unblinking eyes of a coroner. Lush and guttural, Cook leads us on a journey through a harrowing cycle of creation and destruction.
—Kelly Boyker, author of Zoonosis and Poetry Editor at Menacing Hedge

In her second full-length collection of poetry, Juliet Cook offers up a menagerie of beaten, bloodied, insect infested, ink ingested, broken girl bits.  Her words cut into the eyes with nettles and burs, leaving nothing but an empty socket, a hole to be filled with desire “rooted in sick compulsion.” Cook stares unflinchingly at the sugar and spice and everything nice to reveal the dark nature of such malformed conceptions of beauty and womanhood.  Each graphic image is threaded with the red yarn of things that are forbidden to say, so Cook cracks the skull open as easily as the shell of an egg.  She stares the darkest horrors of the mind straight in the eye to say “Doesn’t mean I still can’t maneuver up. / Maybe I just don’t want to / with you." Her poems in this collection leave the reader dazzled by blue blood and dead birds made out of the vocabulary of what it means to be a capital P Poet.
—Tracie Morell, author of Matilda's Battle Waltz

Poetry that devours you. That isn’t afraid to put its best twisted doll foot forward. I like to read Juliet’s poetry in the buff because her words keep me modest as I rail against the perversity of playing with shit and all the anorexic nightmares that go along with it. Her pound cake poetry fits perfectly in your misshapen pie hole. Swallow her words like a handful of blue-tinged tacks because there’s no standing on ceremony in this land of ravenous parasites and machinated halos. Her well-chosen and ill-fated albino words aren’t afraid to get their hands dirty as the maggots begin singing an emaciated melody and there’s nothing left but her Tilt-O-Whirl porno star mannerisms. This collection of Malformed Confetti  will leave you in traction as it’s rolled fresh from the oven and acts as a tranquilizer or dark red cloud burst depending on your dissolution or poisoned discord and how prepared you are to walk into the silently screaming fires.
—Charles Cicirella, co-author of Ether Bisque

In Malformed Confetti, Juliet Cook conveys both a rare elegance and grotesque violence simultaneously. This book is unafraid; it is not ashamed. It takes unabashed risks, and turns language into something that is breathing, and alive with vigor. In this landscape of “secret luminarias” the body is devoured like food, and her “tongue unroots from its dank cave”; “bones are tapered syllables” and “hollow flutes.” There is a vulnerability embedded in the anger and gore, and though some may say we are “forbidden to talk about hunger,” Cook speaks of it fearless of her rivals.
—Lisa M. Cole, author of Dreams of the Living and Heart Full of Tinders

Tuesday 16 October 2018 at 7 p.m. during Poetry Plus featuring Juliet Cook at Art on Madison, 14203 Madison Avenue in Lakewood, Ohio.


Juliet Cook has been writing poetry for more than 25 years. Her poetry has appeared in a small multitude of magazines, both online and in print. She is the author of numerous poetry chapbooks, recently including a collaboration with j/j hastain called "Dive Back Down" (Dancing Girl Press, 2015), an individual collection called "From One Ruined Human to Another" (Cringe-Worthy Poets Collective, 2018), and with another individual collection, "Another Set of Ripped Out Bloody Pig Tails" forthcoming from The Poet's Haven.

The poems within Malformed Confetti range from 2008 to 2015. In early 2010, Cook suffered from an unexpected Carotid Artery Dissection, which lead to an Aneurysm which lead to a Stroke. Later in 2010, while on the brink of divorce and temporarily living with her parents, Cook began to assemble and submit an earlier version of this manuscript. As time went on, she revised it, added more recent poems, and rearranged it, forming it into a dissected but interconnected discombobulation of pre-stroke and post-stroke work.

Cook's poetic style has undergone changes over the years, but her passion for poetry lives on.