Crisis Chronicles Press is back (and catching up)! From May 2019 through September 2021 we only published 3 titles. But now we have at least three titles coming out between now and the end of 2021. Here's the first: 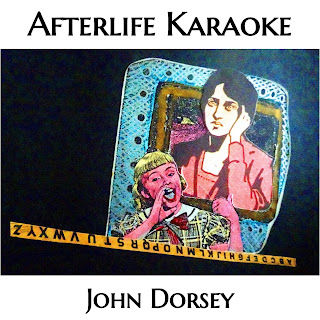 Crisis Chronicles Press is very happy to announce the publication of John Dorsey's new poetry chapbook, Afterlife Karaoke. Dorsey is widely esteemed as one of the best poets in America and his work is unique and essential. He has dedicated this book to the late, great Jack Hirschman.
Afterlife Karaoke is 32 pages, perfect bound, 6" x 6". Contents include "A Dry County," "Easy on the Eyes," "A Chicken Strip in the Shape of a Seahorse," "Walt Disney and Richard Branson Will Meet Again at Freedom Mausoleum," "For Scott Wannberg, Gone 10 Years" and so much more. ISBN: 978-1-64092-951-7. Front cover art by Steven B. Smith. 150 copies in print.
Afterlife Karaoke is available for only $10 (includes postage) from Crisis Chronicles Press, 535 Parkside Boulevard, Cleveland, Ohio 44143 USA.
Join us for the Afterlife Karaoke release party on October 16th, 4 p.m. at The Attic, 1791 Adams Street in Toledo, Ohio, where John Dorsey will also be joined in reading by esteemed poets from around the country. 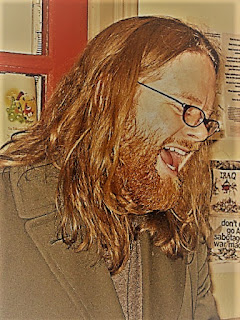 John Dorsey lived for several years in Toledo, Ohio. He is the author of several collections of poetry, including Teaching the Dead to Sing: The Outlaw's Prayer (Rose of Sharon Press, 2006), Sodomy is a City in New Jersey (American Mettle Books, 2010), Tombstone Factory (Epic Rites Press, 2013), Appalachian Frankenstein (GTK Press, 2015), Being the Fire (Tangerine Press, 2016), Shoot the Messenger (Red Flag Poetry, 2017), Your Daughter's Country (Blue Horse Press, 2019), and Which Way to the River: Selected Poems 2016-2020 (OAC Books, 2020). His work has been nominated for the Pushcart Prize, Best of the Net, and the Stanley Hanks Memorial Poetry Prize. He was the winner of the 2019 Terri Award given out at the Poetry Rendezvous. He may be reached at archerevans@yahoo.com.
[Author photo by Dianne Borsenik.]
Posted by John B. Burroughs at 9:24 AM